The 2022 ferruginous hawk nesting season is here! Thanks to AltaLink, an additional nesting pole and platform has been installed. This year we will get a glimpse into the lives of 3 hawk families as they battle the elements, hunt for food, lay eggs, and raise their young. Bookmark this webpage and check back often to see new updates for each nest. Be sure to watch for these hawk nesting milestones this summer: 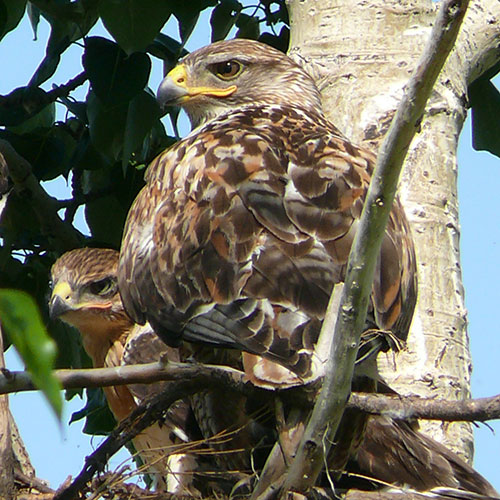 One of the biggest challenges for ferruginous hawks is the loss of suitable nesting habitat; from 1992 to 2005, the species declined by 64 per cent in Canada. The best thing we can do to bring the population back up is to provide nesting areas for them in suitable locations and then not disturb them.

MULTISAR works with many partners to conserve Species at Risk in Alberta’s native grasslands through habitat stewardship. Aside from the ferruginous hawks, there are many other at-risk grasslands species that their work helps to conserve, while also providing a host of benefits to landholders. If you or someone you know manages land in Alberta’s grassland, have a look at what they do here.